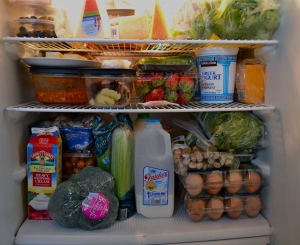 Last Friday was shopping day.  I usually go on Friday mornings–before the weekend crowds but after the shelves have been freshly stocked.  Luckily Trader Joe’s opens at 8AM, and since there had been a dusting of snow the night before I had the store mostly to myself.  It’s my equivalent of being a kid in a candy store.

Colorfully adorned cases of varying yellows of bananas, ripe, red strawberries, stacks of cara cara oranges, and tightly wrapped packages of cucumbers, zucchini, and dirt flecked button mushrooms–all of which made their way into my cart.  Every shopping day is like a mini New Year.  I get to reinvent myself each week with what I eat.

Usually I plan a weekly menu and let the resulting shopping list guide me at the grocery store, but Friday’s trip was a haphazard exception and I let the marketing strategies of the grocery store steer my purchases.  Now I have to figure out how to make a week’s worth of meals out of what I bought.  So far it’s looking like potlicker over papardelle tonight (a first time adaptation of a Southern recipe I found in last month’s Bon Appetite), zen temple dumplings on Tuesday (at my younger son, Aristotle’s request), pistou (a French minestrone-like soup) on Wednesday, spicy tomatoes, spinach, and kalamata olives over capellini on Thursday, and homemade pizza on Friday.

If we make it to Friday having eaten half of these meals I’ll be pleasantly surprised.  My weekly menu, much like a New Year’s resolution, is a worthy goal, but a hard one to follow to the letter, even in my most practical of planning moments.  Somehow life manages to interfere with my most well-intentioned plans, even on the best of weeks.  Still, I dutifully plot out my meals by the week, and pen shopping lists in anticipation of their successful execution, just like I give up sugar every New Year and often again when Lent starts two months later (although not this year!).  In shopping lists, as in those annual resolutions, hope springs eternal.

Let me know what you think by posting your comment here... Cancel reply